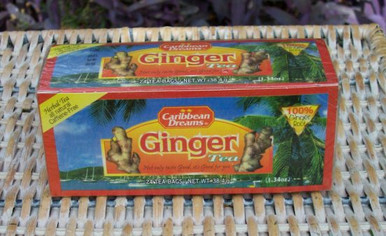 For hundreds of years ginger has been used as a remedy for stomach ailments. It has always been popular as a tonic and was always a favourite drink during the cold seasons. Ginger, originally from Asia, was brought to the west and has been used medicinally and as a food spice for at least 2,000 years, during which time it has increased greatly in popularity. Ginger's unique and spicy flavour and taste sets it apart from many other herbal drinks. Caribbean Dreams Ginger tea carries the rich tradition which started in the east centuries ago. Ingredients: 100% Ginger Root. All natural and caffeine-free. Contains 24 tea bags/Net Wt. 38.4 g (1.34 oz.).

This product hasn't received any reviews yet. Be the first to review this product!